After the Comiccon Stuttgart


The Comiccon in Stuttgart was amazing. I was very excited about it – I had to prepare a presentation as well as a reading of “The Pepper-Chronicles” to be presented on stage. I was also very anxious about the printed version of our comic – would the colors look good? That is usually my biggest concern. (Pssst: You can order copies HERE at Kwimbi!)

After a very turbulent flight, I saw it for the first time: Stefan Dinter from Zwerchfell publishing expected me at the airport and gave me the very first copy of the German edition of “Die Pfeffer-Chroniken". In my hotel room, I had the time to slowly go trough it. It looked like the the colors came out great – as well as the beautiful cover with gold-foil for the title font. 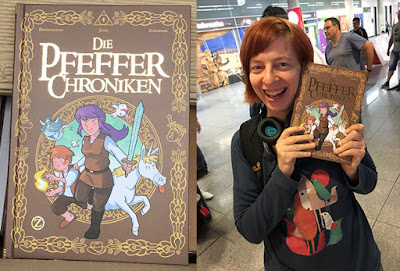 The rest of the con was a beautiful mix of meeting great people – a lot of other talented cartoonists and fans. All of them were so nice and encouraging. It is very draining to sign all day at a very bus con like this, so nice people help a great deal! :D 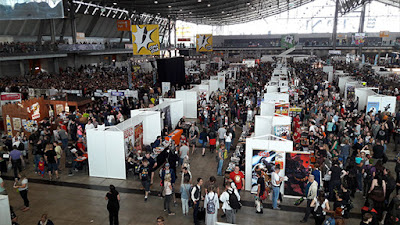 A lot of people came over and bought “Die Pfeffer-Chroniken”. The amazing Eve from the organization “Comic Solidarity” organized a number of presentations for artists on stage, which enabled me to talk about the graphic novel and go a bit deeper into the making-of. The reading went very well: Members of Zwerchfell publishing (Christopher Tauber and Jan Dinter) helped me to read all the different characters, and it went smooth as a clockwork.I also want to point out the the whole con was well-organized, especially the "Comiczone", which was full of artists, publishers and events.

(Below: Author Haiko Hörnig picks up his copy of Pfeffer-Chroniken) 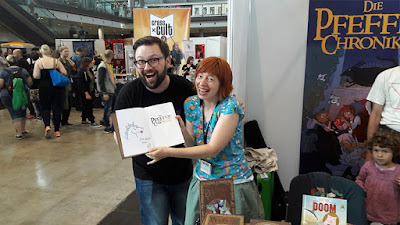 I want to thank everybody who helped out. The organizers, my editor Christopher, the translator Jan, layouter Stefan, all the Indiegogo backers, anybody who came over and bought it – or even just looked at it and had some nice things to say, and last but not least: My amazing project collaborators Rebekie Bennington and Daniel Scribner who did AMAZING work.

Next: Getting this thing published in English!!!! Stay tuned via Pepperchronicles on Facebook.
Posted by queenmob at 6:48 AM No comments:


I'll be at the Comiccon Stuttgart this week. Starting July 1rst - July 2nd, I'll be signing at my table M22, alongside Zwerchfell publishing.   I'll be selling prints, a few of my Star Trek books - but most importantly, the German edition of "Pepper-Chronicles", aka "Die Pfeffer-Chroniken". 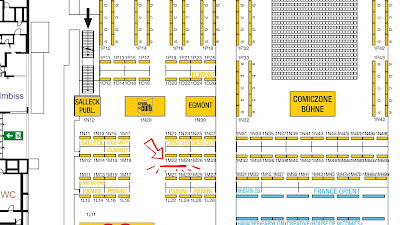 In addition, there will be a presentation & reading of the comic in the Comiczone on Saturday. 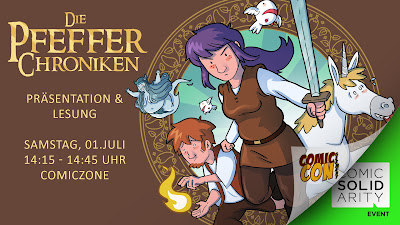 I also feel obliged to let you know that Friday is the last day you can order the comic forten Euros less, plus you'll get a signed print. Just follow the instructions of the indiegogo campaign.
Posted by queenmob at 1:07 AM No comments: 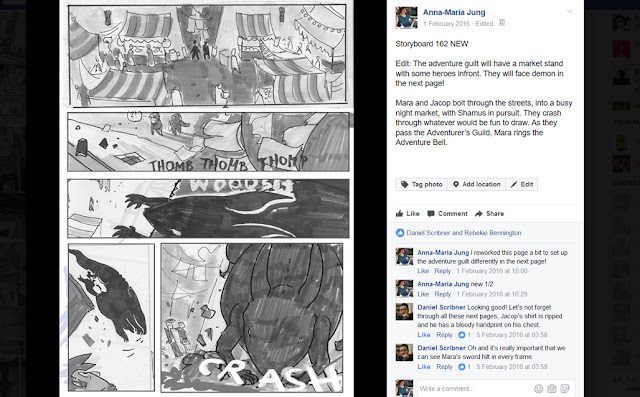 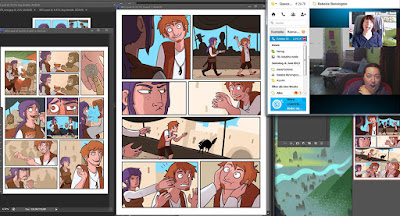 Rebekie and I sometimes used those meeting to just work on the comic on the same time. Sometimes I would use the screen-share-function in Skype to show her things in Photoshop, and vice-versa.
All in all: It took a lot of work to keep it together over the past five + years. Honestly: I had to revive the project a couple of times. I had to plea and to beg sometimes. But in the end, Rebekie and Dan always delivered fantastic work.
Posted by queenmob at 2:36 AM No comments: